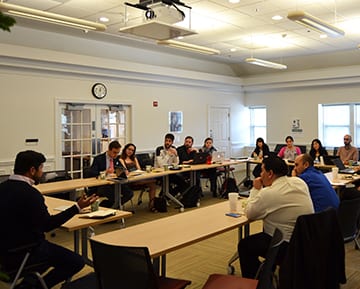 Violence is one of the major concerns in Latin America and the Caribbean. Forty-three of the 50 most dangerous cities in the world are located in the region. Scholars and practitioners agree it is a complex problem with multiple causes, including drug trafficking, gang wars, political instability, persistent inequality and corruption.

Sanford students organized the conference “Peacebuilding and Urban Violence in Latin America: From Local Experience to Public Policy” which took place last Friday, April 15, and aimed to discuss innovative approaches to address crime and violence in Latin America. The panel consisted of practitioners Enrique Betancourt from Chemonics International, Wayne Pitts from RTI International and Andrés Villaveces from the World Bank. The discussion was moderated by Dr. Natalia Mirovitskaya. The conference was followed by a series of three workshops throughout the day on Saturday, where students and faculty were able to engage with the guest speakers who shared methodologies, frameworks and skills to address urban violence in Latin America.

The events were organized by students from the Sanford Latin America and Caribbean Group (Sanford LAC) in collaboration with DCID and the Center for Latin American and Caribbean Studies (CLACS). The Sanford School of Public Policy, the Office of Global Affairs, the Hanscom Endowment and the Duke-UNC Rotary Peace Center provided additional support.

This conference was the first of a series of events that the Sanford LAC group aims to organize in order to raise awareness of the challenges faced by the region.