Home ProfilesSamir Nuriyev Rises to the Challenge in Azerbaijan

Samir Nuriyev Rises to the Challenge in Azerbaijan

The Old City is a very special place. It was included into UNESCO’s World Heritage list in 2000. In 2003, UNESCO began sharing serious concerns about the preservation of Old City and the ability to maintain its integrity for future generations. The World Heritage Committee even included it temporarily on UNESCO’s “danger list.”

Samir says the President of Azerbaijan Ilham Aliyev was also very concerned, so he created a special Mayor’s office for the Old City part of Baku.

“Under the President’s direct guidance and with sincere involvement of the Heydar Aliyev Foundation headed by the First Lady, our office has helped save the Old City from degradation and today it is one of the best preserved Medieval Cities in the region.”

In 2016, the Government of Azerbaijan established the State Agency on Housing Development (MIDA), whose main priority is increasing affordability of housing. Samir Nuriyev was appointed as a Chairman to this organization and began to build it from the ground up.  “It was and still is very challenging to build an organization from scratch,” he said, “but the courses I took at Duke have been fundamental. Cory’s economic classes, Natalia’s stakeholder analysis, Francis’ project design, Bob’s project appraisal, and Jerry’s strategic management helped me a lot in all my recent work, and those courses are helping me now to execute this very honorable mission – to provide affordable housing for people in my country.”

Samir says the agency has not only social but also economic goals. “On one side we provide housing on the preferential terms, on the other side we support local construction companies and building materials producers by attracting them to our activity. So we achieve – as we call it in the MIDP program – positive multiplier effect!”

Samir stresses that ,unfortunately, there are few best practices in affordable housing on which to model this work. “Countries fail very often in their efforts to implement sound policies in this field. It has been very difficult to find our own way of policy implementation based on very few best practices in the world.”

Nevertheless, he believes that after two years of hard work, MIDA is on the right track. “It’s building two big housing areas with 1,843 flats in the first living complex, and 3,000 in the second.  Starting from this summer, the building with fully refurbished flats will be available for sales on preferential terms: 20-30% cheaper than the market price and with up to 30 year mortgage plans.”

Just recently, on April 21 Samir received a new promotion. He was appointed as a Chairman of the State Committee on Urban Planning and Architecture. This organization is in charge of creating and implementing the country’s policy in the aforementioned field. Here Samir plans to apply all his academic knowledge and gained professional experience to make Azerbaijan cities and countryside areas even more beautiful and comfortable for living. “I strongly believe that acquired MIDP’s policymaking techniques complemented by my prior experience of implementing policies in architectural heritage preservation, urban planning and housing development will allow me to carry out my new honorable mission successfully”- he says.

His personal life is also thriving. After returning from the US, his wife Laila decided to get a second degree. She is teaching English at the University of Languages and pursuing her PhD in linguistics. His son, Rafig, who was born in 2005, the same year he graduated from Duke, is a 7th grade student at English-speaking school (IB program) in Baku. Samir beams: “he is very good in math and business management; though it’s hard for me to imagine that he’s learning management in middle school!” His daughter, Emiliya, is in the 4th grade and just celebrated her tenth birthday. Her strength, Samir says, is creativity: “she likes drawing, decorating and her piano and dance classes. She always entertains us with interesting performances.” 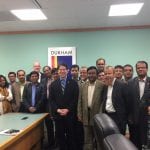