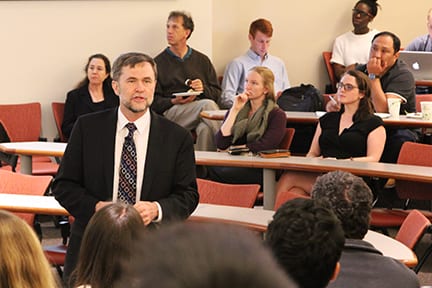 A survey conducted four years ago asked Americans whether extreme poverty was increasing or decreasing. Sixty-six percent of respondents guessed that the number of people living on less than $1.90 a day around the world had doubled over the last 25 years. Nearly 30 percent said it stayed the same.

Only 5 percent of Americans chose the correct answer: Extreme global poverty has plummeted by half over the last quarter century.

“This is one of the biggest changes in world history, and nobody knows about it,” said Steven Radelet, Donald F. McHenry Chair in Global Human Development at Georgetown University and former chief economist for the U.S. Agency for International Development (USAID). “In the last 25 years there has been more progress among the global poor than there has at any other time.”

This is the focus of Radelet’s book, The Great Surge: The Ascent of the Developing World. The book, called “powerful, lucid and revelatory” by George Soros, posits that we are living at a time of some of the greatest achievements in health, education, income and peace worldwide.

Radelet spoke about his book – and a number of positive trends in global development – during a lecture on Thursday, April 14, at the Sanford School of Public Policy. Watch the video.

In two decades, according to the book, a billion people have been lifted out of extreme poverty. Since 1995, the average income in developing countries has almost doubled, excluding China.

In addition, inequality is diminishing globally. In the mid-1990s the gap between the rich and poor countries began to narrow, and income distribution has become more equitable in nearly half of the world’s poorest countries.

These advancements also extend to health. In 1960, 22 percent of children died before their fifth birthday. That number has fallen to 5 percent in 2013.

“What’s remarkable is that the under-five mortality rate has improved in every single country in the world,” he said. “There are no exceptions.”

Adults are living better, longer lives as well. Malaria deaths are down by almost half, and HIV/AIDS deaths have dropped by a third. We also live at one of the most peaceful times in human history, with battle deaths down by 75 percent.

However, Radelet warned against taking an overly rosy view. Even today, more than 900 million people live on less than $1 a day.

“I don’t want to give the impression with all this good news that it’s everywhere and everything,” Radelet said. “Many are still left behind.”

He also said that it is entirely possible for the pendulum to swing backwards, citing climate change as the biggest threat to development progress in the coming years.

MIDP Fellow Preeti Prabhu, who attended the talk, asked where international development professionals should concentrate their efforts to make sure the progress continues.

“Work on what you’re passionate about,” Radelet responded, saying that major changes are still needed in environmental, education and health policy. “There’s still a lot of work to do.”

Previous:
Where do policy and politics intersect?
Next:
Sanford LAC hosts panel on urban violence in Latin America