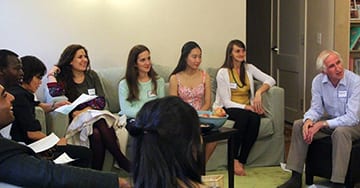 On Monday Sept. 29, Professor Catherine Adcock Admay hosted a small gathering between Robert Walker, a professor of Social Policy at the University of Oxford and an adviser to the UN Special Rapporteur on Extreme Poverty, and 10 MIDP fellows.

The MIDP fellows received the opportunity to ask Walker about his experience and work, which examines the way the pain of poverty extends beyond material hardship. Topics of conversation ranged from how developed countries can be incentivized to aid developing countries in fighting poverty to the regional differences of response in Dr. Walker’s work in India, and whether the shame that poor populations felt would impact their responses.

Dejana Saric, a Duke undergrad who was able to attend the discussion via a lottery, made sure to take advantage of this wonderful opportunity, “I appreciated the opportunity to learn more about global poverty,” she said. “Dr. Walker was extremely personable and willing to engage on the subject of his work.”

Walker was at Duke to speak at an event on Tuesday Sept. 30 at Smith Warehouse that was part of the efforts of the 2014-2015 Duke Human Rights Center@FHI initiative on “The 99 Percent: Poverty, Justice and Human Rights,” and supported by a grant from Humanities Writ Large.

Felipe Magofke, an MIDP student who attended the event, enjoyed the sociological point of view Walker brings to the analysis of poverty, “The concept of shame and dignity are key variables in tackling poverty,” Magofke said “I think dignity should be a goal that all development practitioners should take into consideration.”