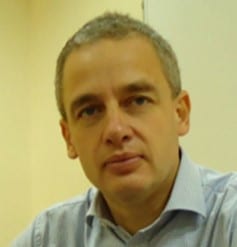 Originally from the island of Lesvos in Greece, Panagiotis Karamanos (MIDP ’95) now lives between Athens and New Delhi. He worked for a waste management company before coming to the MIDP program and while here he focused his studies on environment policy and development. After graduation, he went on to earn his PhD in public affairs, again specializing in environmental issues. A lifelong member of the DCID community, Karamanos returned to the MIDP program as an instructor for two years, where he developed and taught courses and seminars on environmental policy, completed research, and recruited and advised graduate students in the program.

For the past four years, Panagiotis has led a capacity-building project for technical cooperation between India and the European Union related to solid and wastewater management. Last Friday, he was India presenting the results at a workshop and we took the opportunity to catch up with him on some other aspects of his career since graduating from the program.

In addition to your expertise on waste management, much of your overall policy career has been spent at the intersection of environment and aviation. With more than 8 million people flying every day, are airports big contributors to greenhouse gases?  What role does environmental management of airports play in addressing or mitigating climate change overall?

According to the Air Transport Action Group, in 2017 airlines emitted around 860 million tonnes of CO2, which is around 2% of global human emissions. The climate impact of airport controlled activities is significantly smaller than that of aircraft operators and it estimated to around 15-20 million tonnes of CO2 per year. Environmental management of airports plays a key role in addressing the climate change challenge, through proper management of resources and energy efficiency measures, for example. Large airports tend to have independent departments addressing these issues.

Over your career thus far, what changes in innovation or policy reforms have you seen globally when it comes to carbon emissions and aviation? What still needs to be done?

Over the last few years, a number of changes have occurred in the field of aircraft technology, with the development of CO2 emissions Standard for Aeroplanes, the use of sustainable aviation fuels and the implementation of the Carbon Offsetting & Reduction Scheme for International Aviation (CORSIA) by the International Civil Aviation Organisation (ICA).

Regarding airports, Airport Carbon Accreditation is the global standard for carbon management in the airport industry. The programme was launched in Europe in 2009 by Airports Council International (ACI) Europe and since 2014, it has covered all ACI regions. As part of the global efforts in climate mitigation, Airport Carbon Accreditation supports the airport community in reducing its carbon footprint, demonstrating its achievements and sharing knowledge and best practices. Airports covering more than 43% of global traffic are accredited under this program.

Implementation of CORSIA as of 2020 and additional airport accreditations under the ACI program would be beneficial developments.

Has U.S. policy on climate change affected what the European Union is doing or planning to do in this area?

In my view, U.S. noise policy had a more significant impact on European policies. Regarding climate change, I believe it has been the other way around, based on the EU’s ambitious Emissions Trading Scheme (as well as Airport Carbon Accreditation)

You’re now a senior project manager, leading teams, managing stakeholders, and overseeing compliance. What are some of the key skills required (both hard and soft) for this kind of position?  Are there things you learned in the MIDP program that you still use today?

The key skill I learned in the program, and which I still use today, is policy analysis. In other words: looking at a policy problem, formulating it properly, examining alternative solutions, evaluating them and selecting what seems to be the best policy.

What advice do you have for current fellows in the MIDP program who aspire to be senior level project managers?

Be focused and ensure that you convey your position/views (in writing and verbally) concisely!