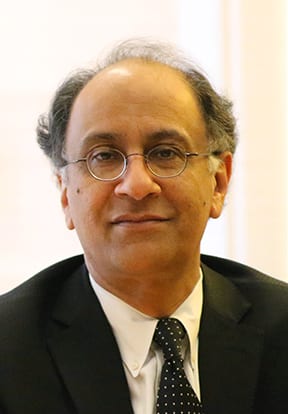 Dr. Indermit Gill, former director for development policy with the World Bank, took the helm as DCID’s new director on Monday, Oct. 3. Learn more about Gill and his goal of “tackling the world’s toughest problems.”

Growing up in India, Indermit Gill always thought of economics in terms of improving people’s lives.

“When you grow up in a poor country, you see economics and development as pretty much the same thing,” he said. “You can’t think of one without the other.”

Gill spent more than 20 years as an economist with the World Bank, most recently as the director for development policy. In October, he will take the helm as director of the Duke Center for International Development (DCID) in Duke University’s Sanford School of Public Policy.

He was drawn to Duke for its ability to bring together scholars and practitioners from a variety of disciplines to address real-world problems.

“Despite its age and traditions, Duke behaves like a young university,” he said. “Instead of putting up walls, people seem willing to work with each other to tackle tough problems.”

Helping countries out of the “trap”

Gill joined the World Bank as a labor economist in 1993 and worked his way up, serving as senior country economist in Brazil and later as lead economist for human development for Latin America and the Caribbean.

It was during his time in Latin America from 1996 to 2002 that Gill made an observation that would help define his career. After decades of rapid economic growth in countries like Brazil and Argentina, development had slowed to a crawl at income levels well short of advanced economies. Later, he and his colleague Homi Kharas would coin the concept of a “middle income trap” to describe how countries can stagnate after reaching a certain level of development.

“Societies tend to create an economic system in which it pays to be big and well-connected to the government,” Gill said. “That’s all right until you get to a certain per capita, but then it kills growth. You can’t let economics and politics interact in a way that jams up the process of change and innovation.”

Later, while working in East Asia, he was able to observe what countries like South Korea and Singapore—which had quickly worked their way up to high-income status—had done right.

First, he said, they kept inequality down by making opportunities available to everyone. Even in the 1970s, when many East Asian countries had income levels lower than South Asia’s, they had education and health levels almost as good as those in Latin America.

Second, they managed the urbanization process more effectively. In many big cities that are plagued by poverty and homelessness, people have come from rural areas because of a lack of basic services.

“You don’t want people coming to cities for services they should get in villages, like primary health care and basic education,” Gill said. “They should be coming to town for better-paid jobs and higher education. When this happens, migrants add to the productivity of everyone around them instead of just increasing congestion.”

Gill addressed these issues as lead author of the World Bank’s 2009 World Development Report, which focused on how development can be quick and inclusive if properly managed. “As countries develop, the geography of economic production becomes spikier, while that of social welfare becomes smoother,” he said. “Successful development policies facilitate both these spatial transformations.”

He is quick to point out that international development has made huge gains since 1985, when DCID was founded. The number of people living in extreme poverty worldwide has plummeted by more than half over the last quarter century. But with nearly 75 percent of the world’s poor living in middle-income countries, he said, the “trap” is a problem that needs to be addressed.

“Precisely because of its success, international development is a much tougher problem now,” he said. “We should be thinking very differently about development now than we did back then.”

When asked about his goals for DCID, Gill does not hesitate.

A self-described “shy kid with a speech impediment,” Gill said his initial insecurity made him a better communicator. In class, he would force himself to speak up. Later, while leading discussions with students or colleagues, he would notice when people were hesitant to share their ideas and make a point to encourage them.

“In some ways you never really change. But over time you discover what you need to work on and you learn to manage it,” he said. “Along the way, these things tend to make you a better person.”

He moved to the United States at age 22 to pursue his Ph.D. in economics at the University of Chicago.

Before the 1980s, he said, economists in the United States often viewed development economics as a separate—and inferior—field. The impression was that people who went into economic development “couldn’t hack it” as serious economists. During his time in Chicago, he saw this attitude shift, and he credits Professor Robert E. Lucas, Jr. for the change.

“People had always realized the importance of economic growth, but the best economists seemed to work mainly on the problems faced by richer countries, such as business cycles. In the mid-1980s, [Lucas] started working on economic development,” he said. “Suddenly, you were free to both be a rigorous economist and do economic development.”

Gill worked for 10 years at the World Bank as a labor economist before becoming advisor to the bank’s vice president on poverty reduction and economic management. He also managed the unit that arranged training programs for World Bank economists.

He worked as chief economist in both the East Asia and Pacific region and Europe and Central Asia before becoming the bank’s deputy chief economist in 2013. For the last three years, he has overseen the World Bank’s flagship publications and supervised a team that managed funds to support policy research in the bank.

Throughout his various assignments at the bank, he set a goal for himself to publish what his teams were learning in the field. This practice resulted in a variety of books and papers on topics such as labor markets in Brazil, social security reform in Latin America, economic growth in East Asia, regional integration in Europe, and economic diversification in the former Soviet Union.

Gill’s father retired in his late 50s after a successful career with the Indian army. Rather than putting his feet up, he surprised his family by embarking on a new career in education. He has now spent more than 20 years finding the ways and means to encourage girls to attend college, and coaching children from low-income families for their college entrance exams.

“He is now 86, he’s worked almost every day since he retired, and he says his second career has been even more fulfilling than his first,” Gill said. Gill sees a parallel in his transition to Duke.

“I’m fortunate to get the opportunity to take a deeper look into some of the development problems we observed at the World Bank,” he said. “At a university-based center, you have the freedom and the resources to investigate the trickiest issues.”