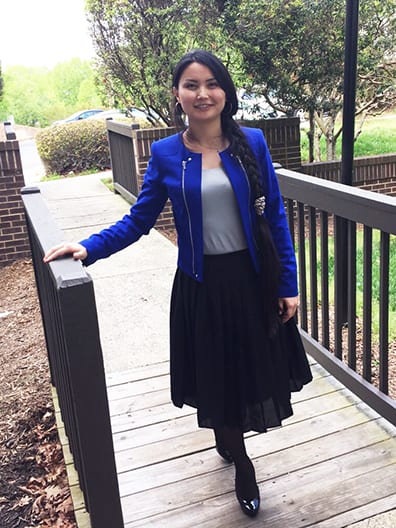 UPDATE: Kizatolla is now with the Prime Minister’s Office in Kazakhstan, where she is in charge of relations with the U.S. and Canada.

Initially Gaukhar Kizatolla, who graduated from the Master of International Development Policy (MIDP) program this month, wasn’t sure about enrolling in the program at all. With a daughter entering school and a baby on the way, she was under pressure from her family and friends to stay home in Kazakhstan.

After researching the program and speaking with DCID’s Dr. Sandeep Bhattacharya at an academic symposium in Astana, she grew more confident that the program was the right choice for her.

“He reassured me that it’s better to come with your family because it’s a very cozy environment and it’s good for families,” she said. “That was a turning point.”

Since coming to Duke University with her husband and two daughters in 2013, Kizatolla hasn’t looked back.

“I never had any sense of doubt that I did the right thing. The program even exceeded my expectations,” she said. “Of course it was challenging, but it broadened my mind and gave me the opportunity to step back and see how my country is developing from the outside.”

After earning her bachelor’s degree in international relations from the Eurasian National University in Astana in 2006, Kizatolla worked for five years at the Ministry of Tourism and Sports, where she ended her time as senior expert in the International Cooperation Department. Her responsibilities included interaction with international organizations such as the European Union, Commonwealth of Independent States and the Organization of Islamic Cooperation.

In 2011, she began working toward her master’s degree in humanities from the Academy of Public Administration under the President of the Republic of Kazakhstan. Since the academy collaborates with the Duke Center for International Development (DCID) on a short-term executive training program for Kazakh officials, Kizatolla soon became familiar with the MIDP and was encouraged to apply.

“It was only after I had been accepted that I became fully aware of how special Duke is,” she said. “My husband’s friends in the U.S. were so excited when I told them. They said Duke is amazing.”

Kizatolla was also awarded the prestigious Bolashak Fellowship, which was established in 1993 by the Kazakhstan government to train professionals who could help the newly independent country move forward. Since that time, more than 10,000 students have studied in 33 countries around the world.

Now that Kizatolla has earned her MIDP, she is looking forward to switching gears in her government job to focus on a new professional interest – economic diversification.

After the collapse of the Soviet Union, she said, Kazakhstan faced pressure to develop quickly and find its place in the global market.

“Oil revenue was kind of a quick remedy at that time,” Kizatolla said. “About 60 percent of the state revenue currently comes from oil. By the late 90s, the government started realizing that this is not a sustainable solution and that we need to think about how to build our non-oil sectors.”

While conducting her master’s project research, Kizatolla studied countries like Norway, Chile and Malaysia, which moved away from fossil fuels and created profitable niche industries in salmon, wine and other commodities.

“We don’t need to abandon oil and gas entirely,” she said, “But these countries provide examples of how to build on the variety of resources you have and how to help growing industries through technical assistance and training.”

During her two years at Duke, Kizatolla said she learned from both her professors and her fellow students.

“I met so many people and made friends from different countries and different backgrounds,” she said. “It’s not just about the coursework; it’s also about the interaction.”

The experience not only changed Kizatolla’s thinking about international development policy, but also her approach to life. In her Economic Foundations class, for example, Dr. Cory Krupp asked students to think of a time when they forced themselves to do something positive with their lives, like quitting smoking or losing weight. Krupp’s example encouraged Kizatolla to be more disciplined.

“[Krupp] gets up every day at 5 a.m. and exercises before starting her day,” Kizatolla said. “Now my husband and I do the same thing!”