Home Is Nation-Building Ever Successful: Lessons from Afghanistan, Colombia, the Balkans and Elsewhere

Is Nation-Building Ever Successful: Lessons from Afghanistan, Colombia, the Balkans and Elsewhere 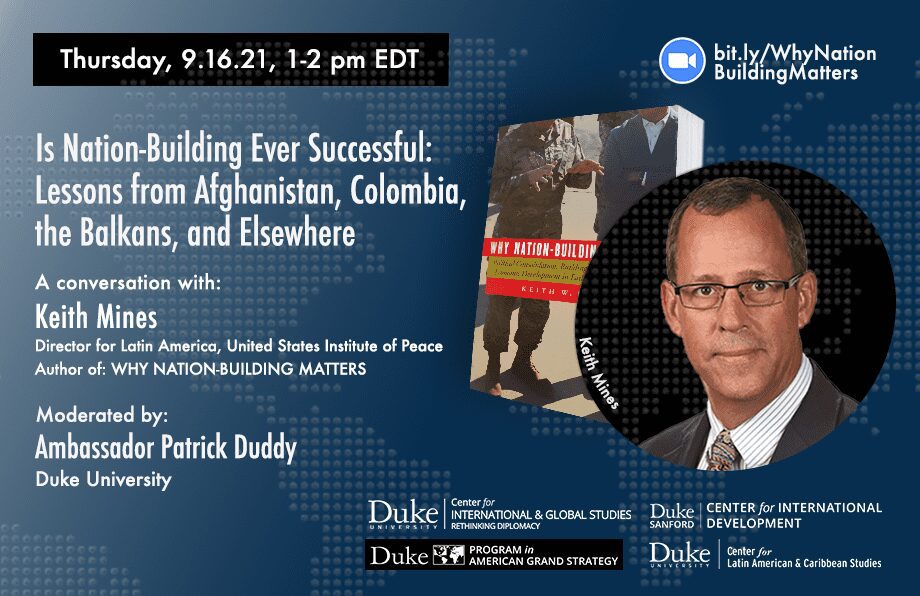 Join Ambassador Patrick Duddy, Director of Duke University’s Center for Latin American and Caribbean Studies and a Fellow of DUCIGS’ Rethinking Diplomacy Program, in a Zoom conversation with Keith Mines, Director of the Latin America Program at the United States Institute of Peace, as they discuss Mines’ new book, “Why Nation-Building Matters.”

No one likes nation-building. The public dismisses it. Politicians criticize it. The traditional military disdains it, and civilian agencies lack the blueprint necessary to make it work. Yet functioning states play a foundational role in international security and stability. Left unattended, ungoverned spaces can produce crises from migration to economic collapse to terrorism.

Keith W. Mines has taken part in nation-building efforts as a Special Forces officer, diplomat, occupation administrator, and United Nations official. In “Why Nation-Building Matters,” he uses cases from his own career to argue that repairing failed states is a high-yield investment in our own nation’s global future. Eyewitness accounts of eight projects – in Colombia, Grenada, El Salvador, Somalia, Haiti, Darfur, Afghanistan, and Iraq – inform Mines’ in-depth analysis of how foreign interventions succeed and fail. Building on that analysis, he establishes a framework for nation-building in the core areas of building security forces, economic development, and political consolidation that blend soft and hard power into an effective package.

Grounded in real-world experience, “Why Nation-Building Matters” is an informed and essential guide to meeting one of the foremost challenges of our foreign policy present and future.

Keith Mines is Director of the Latin America program at the U.S. Institute of Peace (USIP).

Mines joined USIP after a career at the State Department, where he was most recently Director for Andean and Venezuelan affairs. In 32 years of diplomatic and military service, he has worked on governance and institution building in Central America and Colombia; Middle East peace in Israel and the West Bank; post-conflict stabilization in Haiti, Iraq and Afghanistan; global financial stability and the environment in Brazil; security sector reform in Hungary; famine relief and tribal reconciliation in Darfur and Somali; and creating a culture of lawfulness as the first director of the Merida Initiative in Mexico City.

A frequent contributor to publications such as the Foreign Service Journal and Orbis, Mines has written extensively on post-conflict stabilization, peace-building and negotiations, and the roots of civil conflict. His book, “Why Nation Building Matters: Political Consolidation, Building Security Forces, and Economic Development in Failed and Fragile States,” was published by the University of Nebraska Press in 2020. Mines has a bachelor’s in history from Brigham Young University and a master’s in foreign service from Georgetown University.

The online event is open to the public but registration is required.