Event in D.C. on Central America

DURHAM, N.C. – Four panels of experts from academia, think tanks, non-profit organizations, and other groups will discuss short- and long-term policy options for confronting challenges in Central America and forced migration from the region during a free daylong workshop on Wednesday, May 15. Ambassador James D. Nealon will deliver the lunchtime keynote address.

The workshop will take place from 9 a.m. to 4:30 p.m. at Duke University’s Washington, D.C., office, 1201 Pennsylvania Avenue NW. It is free and open to the public. Registration is required.

Guatemala, Honduras, and El Salvador, collectively known as the Northern Triangle of Central America, are experiencing multiple challenges related to endemic violence, climate change, and food insecurity.  These factors have forced people out of their homes and onto the path north, with large numbers of families and unaccompanied minors arriving in Mexico and the United States to seek asylum and a better life.

“Combating the crisis within sending countries will require acknowledging the underlying causes of this recent migration, and developing policy responses to address both the short-term and long-term needs of the region,” said Sarah Bermeo, associate director of Duke’s Center for International Development (DCID). Bermeo, author of the recent book “Targeted Development” and an expert on international aid, is organizing the workshop.

Ambassador Nealon is a career foreign service officer who has served the United States in ten overseas assignments, most recently Honduras. In 2017, he was appointed to an assistant secretary position in the Department of Homeland Security. In 2018, he resigned over policy disagreements related to the Trump Administration’s immigration policy.  An expert in the region, he has been a vocal critic of the administration’s decision to suspend foreign aid to countries in the Northern Triangle.

“If you like irregular migration, then you’ll love what happens once the United States cuts off the very assistance that targets it. Honduras will become more violent, the rule of law will deteriorate, and economic opportunities will dry up,” Nealon has said.

Panels will cover challenges on the migrant journey and after arrival, tackling long-term challenges of violence and corruption, short and long-term development strategies, and policy solutions for asylum seekers and migrants in host countries. Expert panelists include Cindy Huang (Center for Global Development), Mary Delorey (Inter-American Foundation), David Leblang (University of Virginia), Katharina Obser (Women’s Refugee Commission), Mary Giovagnoli (Refugee Council USA), Denise Brennan (Georgetown University) and others from the Wilson Center, Migration Policy Institute, and Oxfam America. Duke’s Sarah Bermeo, Giovanni Zanalda, and Kenneth Maffitt will also speak. Following the event, the panelists will produce a summary document with their policy recommendations that will be available to the public.

Ambassador Patrick Duddy, who was ambassador to Venezuela in the Bush and Obama administrations and now directs the Duke Center for Latin American and Caribbean Studies, said he hopes this workshop will result in some agreements on common sense policy solutions. “What happens in this region has an obvious effect on the United States, so investing in safety, governance, health, and economic development in these countries actually benefits all of us, and helps relieve the desperation that is causing people to take this dangerous journey,” Duddy said. 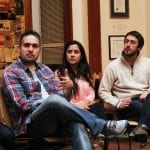 Previous:
Nine Questions For Ali Yildirim Eker (MIDP ’14)
Next:
What it Takes to Reverse Environmental Loss