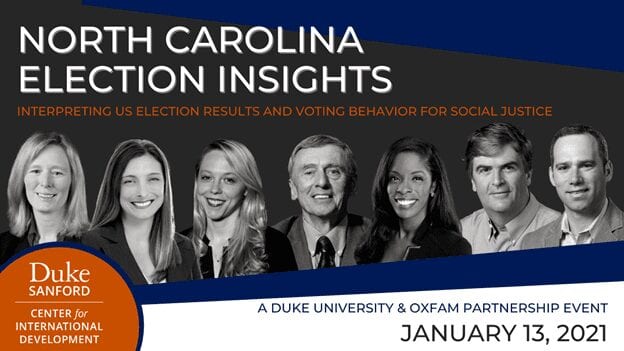 In the wake of one of the most controversial elections in U.S. history, seven policy experts at Duke University shared their insights on the 2020 presidential election and its implications during a virtual panel discussion on January 13. Organized by the Duke Center for International Development (DCID) in partnership with Oxfam, participants discussed the election results, why people voted the way they did, and what it all means for the country on the global stage. The panel featured professors in Duke’s Political Science Department, Sanford School of Public Policy and the Polis: Center for Politics, including John Aldrich, Sarah Bermeo, Sunshine Hillygus, Ashley Jardina, Eddy Malesky, Mac McCorkle and Deondra Rose.

“[This event] is a great launch to what I hope will be a long partnership between DCID and Oxfam, and I want to thank all my colleagues for taking part in this,” DCID Director and Professor of Political Economy Eddy Malesky began.

Over the course of the two-hour event, panelists discussed topics ranging from voter turnout and demographics that helped “make or break” the elections, to record levels of partisanship and polarization, to Trump-era policy ramifications on the United States’ global position moving forward.

As one of the world’s largest NGOs that focuses on anti-poverty advocacy, Oxfam staff were especially interested in how they could tailor their work in the context of the Biden administration.

“President Elect Biden and his team are going to struggle within the international arena in convincing our partners around the globe that we really are back and back to stay. This is going to be incredibly important to get bipartisan support and international agreements and deals, because otherwise, we risk undermining the United States’ position in the international community.”

Malesky echoed the need to engage global communities and partners. “We should really focus now on grassroots and participatory development with a deeper appreciation of local political economy…The one thing that we will continue to have in the development community is the advantage that we are outsiders to local economies and we have the advantage of neutrality and objectivity. So, a focus on providing assistance through tools, accurate data collection surveys, developing clear theories of change and precise impact evaluation are going to be really important.”

Civic participation and partisanship were among the topics planned for the discussion, well in advance of the Capitol riots that took place January 6. The panelists discussed how the riots were closely connected to recent political trends, with the increasingly partisan scene of United States politics encouraging unprecedented participation in both peaceful and violent ways.

According to Professor of Political Science John Aldrich, “Back in the 1980s, most people found they agreed with Republicans on some things and the Democrats on others. Most people were relatively moderate and had things that led them to lean towards both major parties…The electorate has polarized, not just by becoming more extreme, but by finding that they stand on the same side as their party on everything, even if only slightly…That has led to a deepening of the divisions between the two parties, and because of that division, the stakes are extremely high in every single election.”

Regarding the impacts of North Carolina voter participation, Sanford Professor of the Practice and Director of the Polis Center Mac McCorkle added, “North Carolina saw polarization all the way down the ballot…The Trump-Biden race set the vortex for how all the other races happened within North Carolina, and they stayed very close.”

Professor of Political Science Sunshine Hillygus said, “It appears that we are at historic levels of turnout. There was so much variation across the states and in how rules were changed or not, and for whom. One of the messages I want to stress is that we can’t count on this level of turnout in the next election cycle. We must still work between elections to give careful scrutiny of the rules of the game for participation, to figure out if they are, in fact, allowing for equitable participation.”

Panelists also dug deeper into the motivations behind the Capitol attacks and its repercussions. Multiple professors echoed the sentiment that such violence needs a swift, bipartisan rebuke, so that the law is upheld and that the country’s reputation for stable democracy stays strong. Assistant Professor of Political Science Ashely Jardina and Professor of Political Science and Director of Research at the Polis Center Deondra Rose both presented telling statistics to show that the beliefs of the Capitol rioters have been on the uptick.

“It’s not news that Trump has emboldened white nationalists and white supremacist groups in the US since 2016. And it’s very clear that many of these groups were behind the insurrection. But it’s also important that we focus on the extent to which many of the beliefs espoused by white nationalists have become part of the mainstream, and they are very much behind support for Trump…One thing that these public opinion data make clear is that what we have observed is not likely to be an isolated event. Instead, it very much represents much deeper and persistent lines over fault lines of a race in the US that we’re going to have to wrestle with for the foreseeable future.”

In light of record numbers of women and People of Color elected to Congress as well as a woman as Vice President, Rose noted, “We know that substantial redistribution often comes with pushback, and backlash from those who don’t want to give up what they’ve enjoyed. I think that’s exactly what we see going on here with the current transition of power. The harmful rhetoric that we’re seeing really shows that dramatic change in terms of the distribution of power and in terms of creating a more inclusive and a multiracial, women-inclusive Democracy, are not without cost or backlash.”

In conclusion, Malesky reiterated the call for need to reset the country’s national and global agenda. “Because the world is watching, it’s critical that the United States take the right steps right now to bring accountability back to our own institutions. Our institutions need to be shown to work. Otherwise, we’ll lose the moral authority to speak about out about abuses in other contexts. It needs to be shown that violent attacks to overturn a free and fair elections are not tolerated and that perpetrators will face repercussions.”

The Sanford School of Public Policy at Duke University and global anti-poverty nonprofit Oxfam America, began a five-year partnership in 2018, focusing on collaborations in research, executive education, guest lectures, and events. The Sanford-Oxfam partnership is an advantageous pairing on the scene of international development; the Sanford faculty’s foreign and domestic development policy expertise informs global action through the alliance with Oxfam America program and policy teams.

To watch Oxfam’s recording of the event, click here. 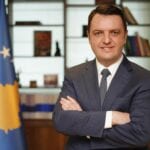 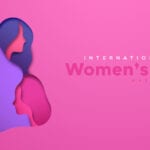