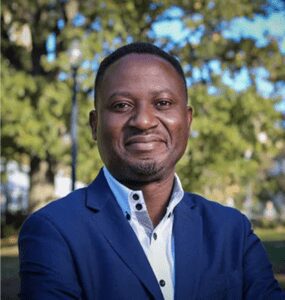 Eric Mvukiyehe is an Assistant Professor in the Department of Political Science at Duke University (tenure track). His academic and policy research cut across many topics and contexts, including on: (i) reducing poverty and promoting socioeconomic welfare and psychological wellbeing for the poor and at-risk youth; (ii) political economy of conflict, peacebuilding and development in fragile and war-torn countries; (iii) strengthening state capacity in fragile states through reforming the civil service and traditional institutions; and (iv) promoting women’s empowerment through socioeconomic inclusion and political participation.

Prior to joining the Duke Faculty, he was an Economist at the World Bank’s Development Economics Vice-Presidency (DEC), in its Development Impact Evaluation Department (DIME), where he helped establish and lead the Evidence for Peace (E4P) program. This is an innovative research program on Fragility, Conflict and Violence (FCV) whose main goal was to provide evidence-based guide to policy action and projects’ mid-course correction, while addressing critical knowledge gaps identified in the World Development Report (WDR) 2014 (see E4P/FCV program blurb here).

Before joining DEC/DIME, He worked in the World Bank’s Africa Gender Innovation Lab (GIL), where he provided technical assistance in the design and implementation of gender programs in Sub-Saharan Africa. He was also a Democracy Fellow with the United States Agency for International Development (USAID),

Prior to joining the World Bank, He consulted for the United Nations (UN) Secretariat, where He led impact evaluations of UN peacekeeping operations in Cote d’Ivoire and Liberia using local population surveys, as part of a broader evaluation of these operations’ performance by the UN Office of Internal Oversight Services (OIOS).

He holds a Ph.D. in Political Science from Columbia University (2014), with focus on international security/relations, political economy, and comparative politics. He has taught, given talks and written extensively about the aforementioned research areas for many years with research published in the Journal of Development Economics (JDE); the Review of Economics and Statistics (REStat); the BMJ Global Health; the Quarterly Journal of Political Science (QJPS); the World Politics (WP); the World Development (WD); the Journal of Conflict Resolution (JCR); the Journal of Peace Research (JPR); and the Comparative Political Studies (CPS), among other outlets.