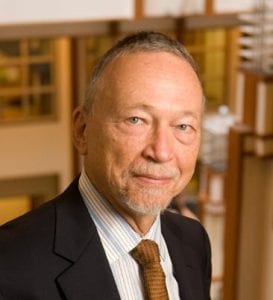 Bruce Kuniholm, professor of public policy and history, is a prize-winning scholar and teacher who served as the inaugural Dean of Duke University’s Sanford School of Public Policy from 2009 to 2013. Kuniholm previously was director of the Terry Sanford Institute of Public Policy twice—from 1989 to 1994, and from 2005 to 2009, during which time his leadership of fundraising efforts led to the creation of the Sanford School on July 1, 2009. He also served as Vice Provost for Academic and International Affairs (1996-2001) and Director of the Center for International Studies. During his tenure, Duke undertook a broad range of initiatives to support the internationalization of the university.

Previously, Kuniholm was a teacher and basketball coach at Robert College in Istanbul, Turkey, served as a Marine rifle platoon commander in Vietnam, and served in the U.S. Department of State— first in the Bureau of Intelligence, and then as a member of the Policy Planning Staff. Kuniholm’s research has focused on diplomatic history and U.S. foreign policy in the Near and Middle East. He has lectured in 24 countries and is the recipient of fellowships from the Council on Foreign Relations, National Endowment for the Humanities, Woodrow Wilson International Center for Scholars, the Fulbright Foundation, and the Norwegian Nobel Institute. He has published more than 100 books, articles, chapters, and book reviews. He has served on approximately 50 faculty and national committees.