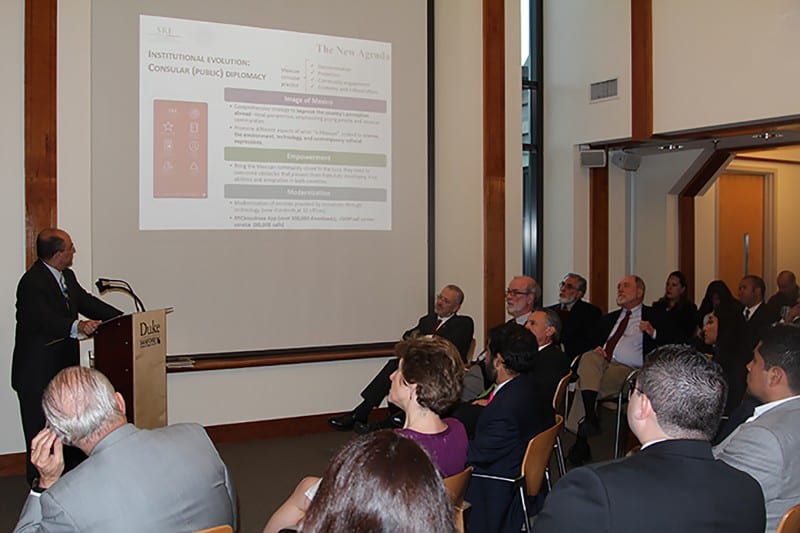 An official of the Mexican government, Dr. Sergio M. Alcocer Martinez de Castro, Undersecretary for North American Affairs at the Secretariat of Foreign Relations, Mexico, addressed faculty and students on Monday, Oct. 27 to discuss growing opportunities for the US, Mexico and Canada. Included in the group of distinguished visitors at the seminar was the Mexican Ambassador to the United States Mr. Eduardo Medina Mora and the Consul General of Mexico in Raleigh, North Carolina, Mr. Javier Diaz de León. 65 people attended the presentation.

Dr. Castro presented the new vision of the Mexican government to strengthen ties in the region through trade, labor, investment and cultural exchanges. This is supported by an extended network of Mexican Consulates and different exchange programs. An active discussion followed the presentation, in which faculty and students exchanged views with the speaker on particular issues of the bilateral relationship, specifics of current policies, and some challenges such as personal security issues.

The seminar entitled: “A Broader Scope of Interaction: Fostering a North American Partnership” was sponsored by DCID as part of the Rethinking Development Seminar Series, and in collaboration with the Center for Latin America and Caribbean Studies (CLACS), the Mexican Consulate, and the Latin American Students at the Sanford School.