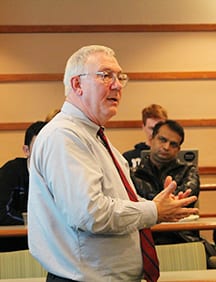 The OECD estimates that multinational corporations avoid between $100 billion and $240 billion in income taxes every year — money that could be used to fund important government programs. Critics argue that moving assets to lower-tax countries is both unethical and unpatriotic.

During the Rethinking Development Policy talk on Thursday, Nov. 12, however, Senior Fellow Peter Barnes said these accusations are over-stated, a version of public “shaming.” Barnes, who has worked as senior international tax counsel for General Electric and as U.S. deputy international tax counsel at the U.S. Department of Treasury, argued that corporations must find ways to stay competitive.

“Corporations, just like individuals, see tax as a cost and make plans to minimize it,” Barnes said.

Companies give their tax departments targets, just as they do with other important business departments, such as sales and sourcing, he added. The tax departments’ main goal is to find legal and effective ways to reduce tax payments.

“Corporate taxpayers must comply with all applicable laws. That’s nonnegotiable. But there is nothing wrong or unethical with tax planning,” he said. “From a legal perspective, this is no different than an individual putting money in an IRA for the tax advantages.”

In the current international tax system, each subsidiary of a corporation generally is taxed separately. Also, countries can only tax a corporation based on the extent to which its activities in that country give rise to income. As a result, corporations are often able to move some more profitable activities to subsidiaries in lower-taxed countries.

Tangible assets like factories and workers do not necessarily make a lot of money for a corporation, Barnes said. Rather, the highest profits are often attributable to intellectual property and risk.

“If Apple could make money having 800,000 manufacturing workers on its books, it wouldn’t outsource production,” Barnes said.

Bermuda, for example, has few tangible assets, but high gross profit. Honduras, with more employees and factories, has a much lower gross profit. This is because Bermuda, a long-time home for insurance companies, has high-risk assets that attract a high rate of return.

While countries are crying foul against corporations, Barnes said, they are also bending over backwards to make themselves attractive locations for activities such as research and management.

“I have a little trouble with countries accusing corporations of unethical behavior while they’re enacting beggar-thy-neighbor legislation,” he said.

The Base Erosion and Profit Shifting (BEPS) Initiative, issued by the OECD and G20 in October, leaves the basic rules of international tax intact while encouraging greater transparency. It ensures more thorough country-by-country reporting of income, assets and risk for multinational corporations with more than €750 million in revenue.

“Some critics argue that this is like rearranging chairs on the Titanic,” Barnes said. “They want to anchor tax liability to tangible assets, such as buildings and people, and allocate much less income to intangible property, but that’s not the world we live in.”

While the new measure is not a cure-all for the rift between corporations and critics, he said, it will drive greater cooperation and exchange of information among tax administrators.

“We may not sing Kumbaya,” he said, “But at least we’ll see that our failure to sing Kumbaya isn’t helpful to us.”