Bibi Khan, originally from Guyana and now a naturalized U.S. citizen, served as a Peace Corps volunteer within the Business Sector in Kenya from 2006-2008. During this time, she was assigned the role of Project Manager with FHI 360, a Durham-based NGO, which was working on addressing the issue of HIV/AIDS with funding from United States Agency for International Development (USAID). Her assignment placed her in Busia, Kenya, on the Ugandan border. In the following article, Bibi reflects on her experiences. 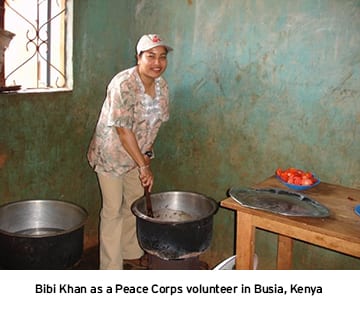 Having grown up outside the U.S., I had a good understanding of how important culture and local beliefs were. I entered the community with respect and an open mind and eventually was able to gain their trust and help identify a key root cause of this devastating disease.

In Busia, when a parent is dying of AIDS, the children, mainly young girls, become the care-givers. Upon their parent’s death, they are often stigmatized by the community and more or less forced onto the street.

Crossing the border between Kenya and Uganda is a long and tedious process. The combination of idle truck drivers at the border with disposable income and the vulnerable young women without any means of earning a living created a perfect “supply and demand” situation. Without proper knowledge of the dangers of the disease and how it’s contracted, unprotected sex was the norm. 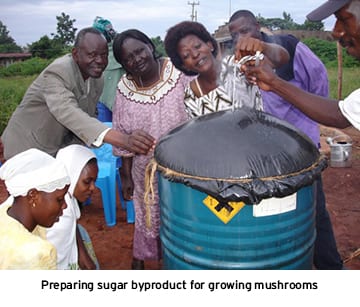 The main question I began asking myself was: How do we change this behavior? How do we find a solution to the “supply and demand”? I identified the development of job skills as a solution for these young women.

After extensive research, we identified that mushroom farming would be a feasible venture. The weather in the area was suitable, the market for the product was viable, and any products that were not sold could be used as food.

Because of my previous work in life sciences, I knew that hospitals use mushrooms as food for HIV and cancer patients. Mushrooms were also in high demand because they have pharmacologically active compounds that are being researched in clinical trials worldwide.

Through collaboration with many U.S.-based organizations in Kenya and local groups, I established a training program where I focused on educating a small group of community leaders who had the ability to “pass on” their newly acquired knowledge and skills about mushroom farming to young women in the community. Culturally, the “train the trainer” method is the most effective and sustainable way to share knowledge. 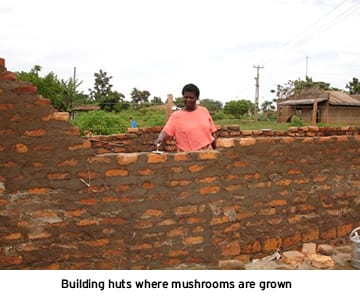 To date, thanks to this specific initiative, the majority of these young women and children have been successfully removed from the streets. After a return visit in 2008, I found that not one of the women involved in the project had returned to selling themselves at the border crossing.

I didn’t do anything other than make these amazing young women and children see their potential, recognize their ability and talents within themselves. It was all about empowering them and encouraging them to see what a difference they could make in their own lives.

As a side project during my time in the Peace Corps, I also helped a local woman fix up a home for orphaned children so it could meet the guidelines to register officially as an orphanage and, as a result, qualify to receive government funding.

My desire to empower women, coupled with my hands-on experience as a Peace Corps volunteer, inspired me to attend the Master of International Development Policy (MIDP) program at Duke from 2008-2010 as a Paul D. Coverdell Peace Corps Fellow. It also was the inspiration behind my MIDP thesis on how behavior can be changed through training and education. 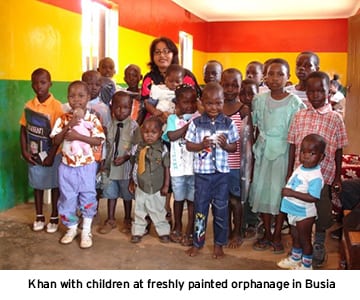 My experiences in the Peace Corps and my time at Duke have significantly helped shape my approach to my current job as an underwriting specialist for life sciences at Chubb Insurance in New York City. In this role, I help companies working on preventing, treating and curing disease meet their insurance requirements and needs.

Working in this industry, where improvements and changes are constantly occurring, the theories that I studied at Duke, specifically in management, have become an active part of my daily work. It doesn’t matter if you’re managing in the public or private sector; it’s whether you’ve mastered the theory and can apply it to different situations.

Even today, I try to embed within my colleagues how important it is to understand diversity and learn from each other. I learned so much from the culturally diverse society I’ve encountered in my life. We can read about events, but nothing is better than hearing it from the individual who has experienced it firsthand.

Previous:
How do we tackle inequality?
Next:
Dhakal analyzes groundnuts and soybeans value chain in Malawi